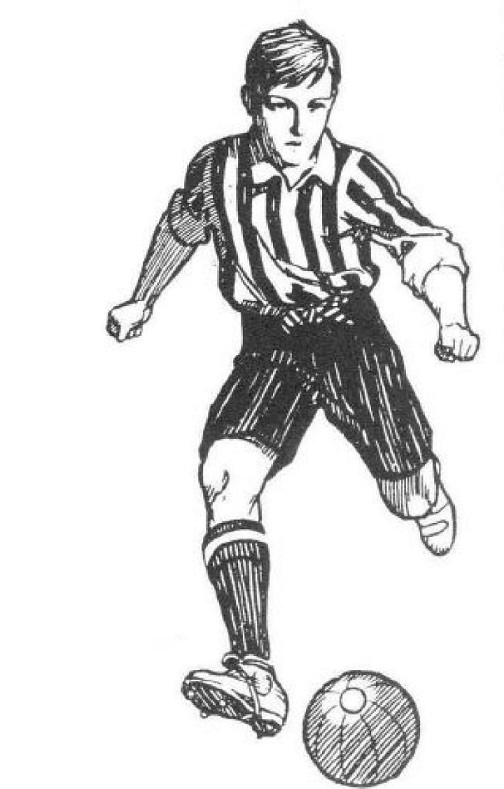 Good afternoon from the Old Mill ground where this thrilling First Division match ended with a 4-3 victory for the Town over title challengers Albion.

The star of the show was once again whiz kid Stanley Mitchell, the eighteen-year-old amateur player who has burst onto the scene this season. Mitchell who is still a schoolboy displayed all the brilliance we have come to expect of him from recent matches. He scored the first goal with a quite remarkable dribble from the halfway line. I lost count of the number of Albion players he left in his wake as he charged up the field.

His second goal was a wonderful volley from the edge of the penalty area that simply flew into the top corner of the net leaving goalkeeper Hanks with no chance.

But for all Mitchell’s undoubted footballing talent he once again showed his immaturity and ill-discipline. He was dismissed from the pitch in the 75th minute when he went down after being tackled in the Albion area. He claimed a penalty which the referee denied.

Mitchell refused to accept the decision and spent some time arguing violently with the referee Mr Calderstones. The air was quite blue. Mr Calderstones quite rightly sent off Mitchell who reacted by taking off his shirt and throwing it to the ground as he left the field.

Although he is a quite brilliant player Mitchell is garnering a reputation for being a spoilt, unruly, petulant young man. Much to the annoyance of his fellow players and his manager Mr Clapman.

I am told there was a scene in the dressing room after the match. Alf Mortenson, Town’s burley captain, intervened on behalf of his club-mates. Young Mitchell soon found himself across Mortenson’s knee in the fashion of many petulant boys. His football knickers and underwear were ripped down so that his bottom was quite bare. A size-12 rubber-soled plimsoll was then used with some vigour.

Many listeners may know  from their own experiences with physical-training instructors at school that the plimsoll in the right hands is an awesome punishment tool. Mortenson, who stands well over six-foot-five and weighs fifteen-stone was well placed to deliver Mitchell’s much-deserved spanking.

Mortenson was encouraged by his clubmates who watched and cheered as he hammered the slipper across the young brat’s naked bottom. No square inch of the buttocks was left unattended. The eighteen-year-old was said to be howling and hollering long before the captain let up.

One thing is for certain it will be a very uncomfortable ride home for Mitchell on the team bus.

We shall have to see whether there is an improvement in Mitchell’s behaviour at next week’s match against Rovers. Meanwhile, the wonderkid has to return to school on Monday and it remains to be seen if his headmaster has something more to say on the matter.

This is Raymond Gladhanding returning you to the studio. Eamonn.

Smoking on the bus

One thought on “Sports report”