Many years ago when I was a student I lived in lodgings with a family who rented out three rooms in their large house. The man of the house was retired and although quite old (to my youth he may have seemed ancient) he was very distinguished. There was a small armchair in my room and many nights I would fantasise that he had me across its back while he lashed a whippy-school-type cane into my pyjama-clad bottom.

I had no idea then that decades later I would use this fantasy as the basis of a series of my stories. One of the first that I ever wrote and published was called Paul and His Landlord. In real life, one night I got back to the house so late that the front door was locked and I had to ring the bell hard and waken the household to get in. I must have inconvenienced many people that night, but nothing was ever said about it.

Not so in my story where I end up receiving a well-deserved caning.

I wrote two episodes of Paul and his Landlord and you can read them by clicking the links below. Remember, they are stories although inspired by real life.

I have written other stories about landlords that were similarly inspired by other real places that I lodged. Links to those are also below.

I hope you enjoy reading them as much as I have enjoyed fantasising and writing about them.

Paul And His Landlord

Where it all began. That late night home. —- It was then Paul noticed his landlord was holding the cane. He wasn’t flexing it between his outstretched hands in the way drawings of headmasters did in old comics, or how Jimmy Edwards did as the eccentric headmaster in the TV show, Whacko! No, Mr Jarvis simply held the cane perpendicular to his body and was gently tapping it against his leg. Paul was mesmerised.

Paul and his landlord 2

Paul stood, his hands behind his back. Waiting. Breathing heavily. He looked down at the huge padded vinyl armchair. It was a very comfortable chair. But, this evening he would not be sitting down in comfort. Not in that chair or anywhere else.

His landlord tapped the thick crook-handled rattan cane against his right leg. Tap, tap, tap. Then, swoosh! it roared through the air as Mr Jarvis swiped it in front of the twenty-year-old’s face.

“I caned you once before for coming home late drunk and disturbing the whole household.” Mr Jarvis flexed the cane, making a perfect bow. “But evidently I didn’t cane you hard enough.”

I wasn’t sure what I was supposed to do. I stood about two feet away from the arm looking across at the couch. It was so big four adults could probably have sat on it in complete comfort.

The top of the padded arm of the couch was about a metre high and maybe 75cm wide.

“Bend over the chair,” Mr Martin ordered. He was angry and I was scared. Nothing like this had ever happened to me before and I couldn’t figure out how the hell I was going to get out of this.

What I did next profoundly changed my life. I took a deep breath to try to calm my raging heartbeat and walked into the lounge. The room was dimly lit by a standard light in one corner, I hardly saw Mrs. Adams and her sister lolling on a sofa. They stood as I come in; it seemed they were expecting me.

My house. My rules

“You will address me as ‘Mr. Shults’ and you will address my wife as ‘Mrs. Shults.’ You will be polite at all times and obey without question any instructions that either of us might give you.

“These are the rules of the house. It is my house and I make the rules. If you choose to brake one of my rules, you will be spanked. With your trousers down. I shall spank you on your underpants and if you dare to repeat your rule-breaking you will be spanked on your bared bottom.”

Mr. Epson strode into the lounge brandishing his cane. Jerome stared, confused, unsure what he should do.

“Bend over. I’m going to beat you with this cane. With your trousers and underpants on it probably won’t hurt you much, but it will give me a considerable amount of pleasure.” Mr. Epson thought this, but did not say it out loud.

Instead, he did say, “Bend over. Touch your toes.” 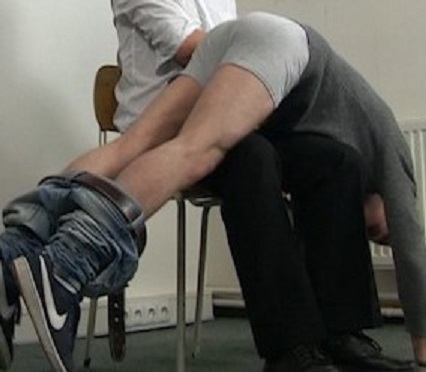 Meekly, Steph draws in a lungful of air, takes a half a step forward, steadies his nerve, places his palms on Mr. Walter’s right leg and eases himself down. He stretches his arms forward then spreads them a little and presses his palms into the scratchy carpet. He cannot see this but his bottom rests high over Mr. Walter’s lap. If he cares to look, Steph can see under the chair to his feet where his toes don’t quite touch the floor. Steph keeps his head low and stares at the carpet. He wants to pretend he does not have an audience of fellow lodgers, but their nervous breathing is louder than the bird calls from the garden beyond the open bay window.

The spanking I thoroughly deserved

The weirdest thing happened to me last week Sunday; my landlord took me across his knee and spanked my bare bottom with a brush very hard indeed – and I let him do it.

It wasn’t a fetish thing; you know where people spank each other for sexual kicks; it was discipline – or more truthfully, punishment.

Kevin’s landlord is flexing the cane between his two hands. This is real enough. Kevin is confused. Kevin is over the back of the armchair; he is just the right height. The cushion soft in his hands. He feels the back of the chair sticking into his stomach. His trousers are very tight. Kevin’s landlord makes his preparations. Kevin waits in position ready for the first stroke. He does not know what to feel. It is unreal. It is absurd. A nineteen-year-old presenting his bottom to his ageing landlord so he can whack it with a school cane. It may be absurd, but it is also intensely exciting.

The stories Paul and His Landlord with others about troublesome tenants is also available as a free-to-download book (PDF file).  You should be able to read it on your lap top or e-book reader.

A memory in the attic

The boys in room 3b

Someone needs his bottom spanked

The tenants and the headmaster

Landlord is sick of the lodger

You didn’t pay the rent

A spanking before bedtime

The Spanking Vicar of Aston Budleigh – the compilation