Skip to content
HomeThe escapee (or Blakey on the run)

The bars across the window had been sawn through weeks before. They hadn’t been fixed. Money was tight. There were more important things to worry about. Blakey pulled open the sash windows. It was almost dark. The rest of the “students” would be down in the recreation rooms in the hour before bedtime. Now, was the perfect time. He lowered himself to the ground. Crouched, just to check that there were no master around. The coast was clear. He ran towards the gate and was through it and on the road through the Widdicombe Woods in seconds.

It was hardly The Great Escape. Central Industrial School was an establishment for young offenders; chiefly petty, but persistent criminals. Society looked them up in school where they learned a trade before being allowed back to live among decent folk.

It wasn’t high security prison. Really, it was just like an ordinary boarding school; except for the bars. Inmates – or “students” as the authorities preferred to call them – escaped from time to time. Nobody at the schools cared too much; they always got caught. Some found so-called “freedom” tough and handed themselves in. When the masters – as they called the “warders” – found out Blakey had absconded they wouldn’t lose too much sleep.

Blakey wouldn’t get far. The uniform he was forced to wear would give hm away. Someone would soon spot him and know he was on the run. There are not many nineteen-year-old boys running around wearing blue short trousers. And certainly not in November.

No sirens were sounded; no road blocks set up. Blakey wasn’t a murderer or a rapist, breaking into gas meters was his speciality. In time local police would be informed.

Central Industrial School was two miles outside the small town of Brocklehurst and that was Blakey’s destination. He had a girl there. Blakey had needs. So did many of the students at Central Industrial School. It was the way they met those needs that upset Blakey. He needed the real thing and Doris, his girl, would see to it that he got it.

He lasted nearly two whole days. Two officers in a police car took him back. Capt. Harris, the “headmaster” and chief “housemaster” Mr White were ready to receive him. Preparations had already been made. Before the police car had made it to the end of the school’s drive, Capt. Harris gave the order, “Take him down to the gymnasium.”

Blakey made no protest. He didn’t struggle. Calmly, but not meekly, he followed Mr White. There was an eerie quietness about the place. Students were in classes in the main school building. The gymnasium stood on its own at the far end of the school grounds, a little behind the football pitches. It was cold, a frost had not melted and Blakey’s feet crunched along the ground as he trudged to his fate.

Mr White was silent. He had nothing to say. He didn’t care to ask why Blakey had run away; why the boy had done it in the clear knowledge that he would be caught. And what would happen to him upon capture. There was no secret about these things.

The gymnasium was a dilapidated building constructed mostly of wooden slats. It was cold and damp, uninviting at the best of times, even less so on this bitter winter’s afternoon. The door had been left ajar. “Get in,” Mr White barked. He stood aside to allow the nineteen-year-old absconder to enter ahead of him. Mr White feared the lad might try to make another run for it. The gymnasium was dark and dank, and almost completely empty. The first thing Blakey saw as he entered was Mr Albion; another of the school’s housemasters. Mr Albion taught mathematics. He also held a special role in the school. One that made him both feared and hated by the boys.

Blakey blinked hard. It took a second for his eyes to adjust to the dim light. He saw Mr Albion standing behind an old, worn down vaulting horse. But that was not what startled Blakely. Behind Mr Albion and lined up against the wall were three huge enamel buckets and poking out of each of them were a bunch of birches, each soaking in what appeared to be dirty water. Blakey couldn’t stop his eyes from blinking rapidly. This time it wasn’t the poor light that had his lashes flickering. It was trepidation. He peered closely and even at a distance he saw each birch rod was a cluster of nine or ten leafless branches three feet long and tightly bound at the base with sticking plaster.

“Step forward, stand in front of the horse,” Mr Albion barked. Blakey hesitated. He wanted to comply; he couldn’t get his body to agree. “Hurry up Lad!” Mr Albion did not try to hide his impatience or his disdain for the “student” standing before him. At last Blakey’s legs were able to obey and he stood, unsteady on his feet. He heard little of what Mr Albion said next, he was staring at the leather horse. It was about four feet off the ground and had four short and sturdy wooden legs. Attached to each of these legs, around eight inches from the ground, were heavy leather straps. There could be no doubt of its purpose.

Only then did Blakey notice Mr Albion had moved towards the enamel buckets. Now, he stood gripping a bound birch rod in his hand, its long and thin twigs provocatively splayed.

“Remove your clothes,’ the terse order seemed to be made by a voice from a very long distance.”

Blakey croaked. His throat was dry, his legs shook and his stomach lurched with sickening fear. He couldn’t formulate a response. Mr Albion repeated himself, “Remove your clothes. All of them. Make a pile over there.” He swished the birch rod in the direction of a near corner. Water droplets flew from it and left a damp patch on the floor near his feet.

Blakey’s body once more refused to move. The enormity of his situation dawned on him. The horse, the straps, the birch, all threateningly combined for an attack on his fragile body.

Mr Albion glared at the wretched boy in front of him. “Do as I say and we can get this over and done with.”

Blakey could still not speak but his body responded. He was on some kind of auto-pilot. He removed his jacket and let it drop to the ground. His baggy, ill-fitting shorts fell to the floor the moment he released the belt. His shirt was next. Then he was dressed only in undervest and drawers. He stood, eyes now pleading with Mr Albion.

“Everything. All of it. Naked,” he roared, no longer speaking in sentences.

Blakey put his fumbling hands underneath his vest and, nervously pulled the rough material over his head. As he did so he smelt his own sweat. His armpits were rancid. He dropped the vest at his feet. Then, he slipped his thumbs inside the waist of his grey, woollen drawers. Like all of his clothes they were ill-fitting and they were soon down to his ankles. Immediately, and instinctively, he clasped his hands in front to hide his privates.

“Step out of them,” Mr Albion swished the birch rod again. “Kick them away. Right out of the way.”

An observer of this scene might have been surprised to witness what happened next. There were no abject pleas for mercy. No cursing and swearing. No struggles. No unseemly fight as Blakey fought to escape the terrible ordeal that was ahead. The lad allowed himself to be led by the arm to the horse. There he was bent over and tied, first by the hands and then by the legs. The downward slope of the horse meant that his backside was raised unusually high. In a moment his bare behind would feel the first kiss of the birch. Two hard, round hairless buttocks quivered as Mr Albion gently touched the splaying twigs against the naked flesh. 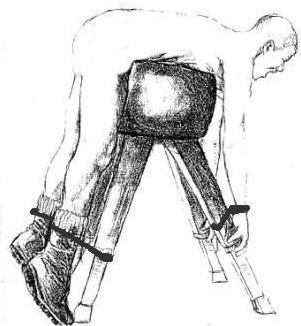 Then, he raised the birch and remorselessly, and with a skill honed by experience, lashed it down across the upturned naked cheeks. Blakey yelled. He was no stranger to corporal punishment, his backside had been blistered by any number of whippy, rattan school canes. This was different. The cane delivers a single blow each time it falls, the birch causes more pain, owing to the number of thin supple rods. The more Blakey yelled the more Mr Albion lashed the unrelenting birch across his arched backside. Each combined thrash of the individual twigs found every inch of the lad’s mounds.

By the third stroke Blakey was lurching both to the left and the right. By the fifth stroke, realising that unremitting straps held his naked frame firmly in place, he begged for release. On the eighth he sobbed uncontrollably. “Please sir, no more. Please!’

The ninth stroke of the birch caught the underside of Blakey’s buttocks. “No more. Oh god, no more.”

The tenth and eleventh strokes lashed across the dividing curves of the young and, still smooth, backside. The twelfth stroke, firm and true, fell hard across the centre of all that had gone before.

Mr Albion’s birch had done its work for the final time. The last stroke embedded itself in the bare flesh and, having left a final mark, dragged down the outstretched legs and rested.

Blakey gradually ceased his screaming but continued to sob and bleat. Even that faded away to nothingness until, eventually, an eerie silence and stillness fell upon the gymnasium. Only the picture of a beaten lad, stretched naked across a vaulting horse. Mr Albion and Mr White left and did not return for ten minutes but, when they did, a still and exhausted lad had resumed his quiet sobbing.

Then the man who had birched Blakey’s bottom gently released the restraining straps and, just as gently, lifted him off the horse. For a moment Blakey was unbalanced and dizzy but, as Mr Albion put a steadying hand on his shoulders, his own hands moved to ease his burning rear. In silence and with much difficulty Blakey climbed back into his clothes.

“Come with me, that backside of yours needs some attention,” Mr White demanded and he led the way from the gymnasium, a bulge in his right hand trouser pocket causing him to limp a little.

Trousers down. Over my knee