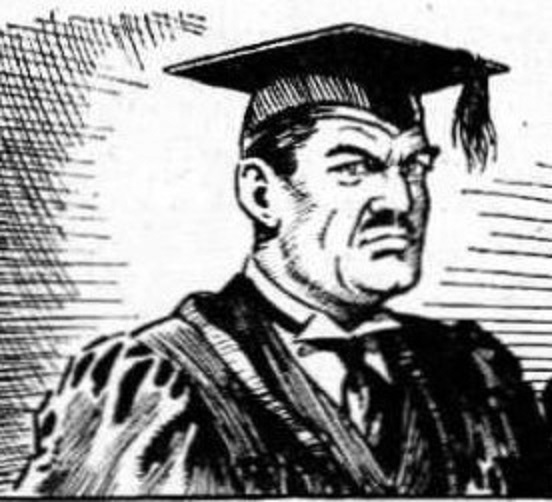 “Right Brooking,” the headmaster flexed his whippy rattan cane then pointed to a spot in the centre of his study, “Bend over. You two,” he gestured to my pal Christianson and myself, “Stand there, by the wall.” He turned back to Brooking, “Right-over lad! Touch those toes.” Brooking stretched his finger further down his shins. “Keep those knees straight, boy,” the headmaster swiped his cane through the air, not trying to hide his impatience. I could see the strain in Brooking’s face; touching toes isn’t as easy as it sounds.

The headmaster stepped forward and stood behind my pal. I had the perfect view of Brooking’s backside, stretched against his pale-grey trousers. They were so tight I could just about make out the outline of his underpants. I was surprised to see he wore briefs; Boxer shorts were the fashion among we boys at the time.

The headmaster tucked the cane under his arm, it slipped down a little as he leaned forward and with both hands took hold of the tail of Brooking’s blazer. He pushed it a little way up his back so it was away from the target area. An inch or so of Brooking’s white shirt poked out from the waistband of his trousers and I saw a little flesh.

The headmaster “sawed” his cane across the centre of Brooking’s bum, but below the crest. It was quite a big bum, I suppose. Brooking was one of the tallest boys in our sixth-form; easily over six foot and although he was in no way fat (not like the obese schoolkids you see today) he was beefy. Meaty, you might say. The headmaster tapped the cane a couple of times and I saw Brooking close his eyes and screw up his face, ready for the ordeal. We were all eighteen years old and in our final year at school but a caning from the headmaster was still nothing to be sneezed at.

Satisfied that he had a good aim, the headmaster raised the cane and I saw it wobble as he took it above his shoulder and then return it with a terrific whoosh! so that it cracked hard into Brooking’s hard bottom. There was no time for the pain to register or for Brooking to react before the second swipe caught him on the undercurves of his bum. Six strokes swiped down rapidly. It was all over in about fifteen seconds.

“Stand up lad!. Stand over there. Christianson take his place.” Brooking stood gingerly, his face was scarlet. He always had a pale complexion and I suppose being made to bend over like that must have sent the blood rushing to his head. Apart from his colour he didn’t appear to be unduly concerned about his caning. I couldn’t be so sure about Christianson. He didn’t have Brooking’s stoicism, in fact he looked decidedly nervous as he settled himself in the middle of the study. It was a small room, dominated by a too-large desk (something to do with status I suppose) and there were two “easy” armchairs at the other end and a row of shelves. In the corner was a hat stand with no hats (they had gone out of fashion long before) but three canes dangled by their crook handles. They were of differing lengths and thicknesses but none of them was as dense or as stout as the one the headmaster had chosen to pepper our arses with. We were senior boys and so were getting the “senior” cane.

The headmaster aimed his cane across Christianson’s backside and fifteen seconds later he was back on his feet. His face was pale and his eyes were definitely moist, but I don’t think he was actually crying. Tears were not rolling down his cheeks. He rubbed his bottom ruefully as he took his place back by the wall. He went down in my estimation for that. Generations of schoolboys have abided by an unwritten law that says you never let the master know you are in pain. We would rib Christianson unmercifully later for not being able to “take it”.

It was now my turn. I strode to the spot and in one athletic movement I was peering down at the worn rug. Before I stretched my fingertips to brush the toecaps of my shoes I pushed by hands behind me and flicked the tail of my blazer away from my bum. It was my way of telling the headmaster, “Go on then. Do your worst. See if I care.” I returned my fingertips to the shoes took a deep breath and let him get on with it. Fifteen seconds later I was standing. My bum was burning but I wasn’t in any great agony.

The headmaster hadn’t flogged us, he had caned us. It was a schoolboy punishment. Six-of-the-best, we called it back in the day. The cane burns the moment it whacks down across your stretched backside and the way the headmaster laid on his canings so rapidly meant that burning sensation built up as each successive stoke hit you. So, by the time he’s through your bum is on fire, but that pain disappears pretty quickly. By the time the headmaster was ready to dismiss us from his study the pain had diminished to a throbbing and before too long was no more than a tingle. The bruising would fade over a day or two, before disappearing completely.

After we left the study we went down to the sixth-form bogs and compared our marks. That was another unwritten schoolboy law: you have to show your pals. Then, we went home and forgot about it. That happened more than forty years ago and I can’t remember what we had done to deserve that particular caning; there had been so many. It was that kind of school: traditional curriculum, traditional sports, traditional uniform, traditional discipline. I suppose it was just an ordinary day at that school.

….. Sorry. I lost my thread there…. Why am I telling you this? ……. Excuse, me I must go mix myself another gin-and-tonic.

Pyjama bottoms down. Bend over (again)

The spanking I thoroughly deserved