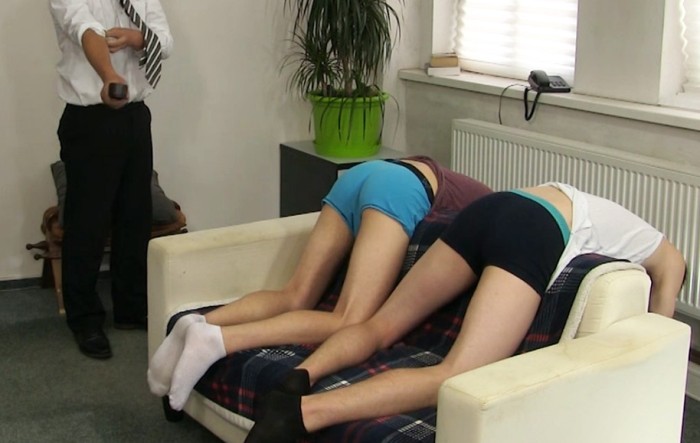 Dick and Dave were sure they were in the clear. Dominic would never find out. They had covered their tracks well. It was A Result. But, they hadn’t reckoned on a nosey neighbour.

Dominic was going away to an important conference in Paris; his son Dave and nephew Dick were eighteen; he thought surely they were old enough to behave responsibly while he was gone. Then, he saw an old movie on television. It put doubts in his mind. It was Risky Business the early Tom Cruise one where he dances around in his tighty-whities. While his parents are away he holds a party and before you know it the house is turned into a brothel. A priceless glass object gets damaged along the way.

“If it had been me I’d have had that Tom Cruise over the back of the couch,” the man from across the road told Dominic, “And I’d have paddled his backside until it glowed in the dark. After first taking down those underpants.” There was no answer to that so Dominic didn’t even try.

It put him in a bad mood. What if the kids did have a party and it got out of hand? Dominic thought he had found the answer. He called Dick and Dave together and clearly in words of one syllable he ordered, “No parties while I’m away. No guests. No nothing.” That was settled: they knew the rules.

Teenagers being teenagers the words went in one ear and out the other. The lads had already made plans before Dominic spoke. The party was swell. Lots of people turned up and there was booze and drugs. Dave got laid. Dick didn’t; he was beginning to realise he didn’t much like girls. He still had to come to terms with that. No drinks were spilt; no priceless objects were damaged and no carpets were burnt with cigarettes. After the vacuum cleaner had done its work, no one would have known the party had happened.

Except the man across the street. The Avenue is a long road of mostly detached houses. Dominic’s was sheltered from the road by a wall and a gate. That didn’t stop the man. His lace curtains twitched the whole time Dominic was away and his camera phone was never far from his hand.

Dave never much liked the man. He thought he was a bit creepy and always looked at him oddly. He wasn’t the least surprised when his dad told him the man had split on him and Dick. “I am very disappointed in the pair of you,” Dominic said. He was too. It was bad enough that they had a party but they had defied his explicit instructions. He could never allow defiance; the world would go to Hell in a handcart if he did.

“I told you no parties and you defied me,” he said as he unbuckled his belt. If Dick and Dave had any doubts about his intentions they vanished when he pulled the belt through the loops on his trousers with a flourish. The belt made a terrific THWAP sound. Dick’s eyes popped on stalks, “B.. we’re too old to be spanked,” he stuttered. Inwardly Dave cursed his cousin, “Don’t say that, it’ll only encourage him to wallop us even harder.”

Dominic grunted. He was a man used to giving orders. He expected them to be obeyed – without question. His business empire was built on this. He spoke quietly and clearly, “What I want you two to do is take off your jeans and kneel on that sofa and bend over the back of it.” He waved the leather belt at a small two-seater couch in case there was any doubt what he meant.

“B …” Dick tried to speak but the fierce glare in Dominic’s hazel eyes stopped him dead. Dave, no stranger to his dad’s belt was already unfastening his jeans. “You too,” Dominic pointed at Dick, “Get on with it.”

Dick’s face coloured bright red. How could this be happening? He was eighteen years old, a student at a top university and here he was being made to take off his jeans so his uncle could spank his bottom with a belt. A sudden thought gripped him, “Please God don’t make me take down my pants!” By now, Dave had slipped his jeans over his feet and laid them neatly on a coffee table. He stood without obvious embarrassment in t-shirt and boxer shorts and waited for his cousin to catch up.

Dick eyed Dave; noticing the bulge in the front of his boxers. Dave gave him a half-smile by way of encouragement. He wanted this over as quickly as possible. Dick responded by pulling the zipper of his jeans. He couldn’t easily control his hands but at last he had the jeans down and over his feet. He dropped them untidily alongside Dave’s on the table.

“Get over the sofa,” Dominic folded his belt as he spoke. In response to Dick’s puzzled look, he said, “Watch Dave, he’ll show you how to do it.” Dave turned to face the sofa and climbed on the seat one knee at a time. Once settle he leaned over its back so that his face was staring down at the carpet. In this way his head was low and his bottom high. It made a very good target for Dominic’s belt. Dick watched in awe. Until then he hadn’t realised how firm and round his cousin’s bum was. His navy-blue boxers fitted him snugly and contrasted with his smooth, almost hairless legs.

His own pale-blue boxers didn’t fit him half as well; it served him right for buying cheap ones at Primark. His hands had stopped shaking so much and he placed them on the back of the sofa to steady himself as he copied his cousin’s position. The two eighteen-year-olds were now side by side over the back of the couch, their heads so close together Dick could smell the beer on Dave’s breath. He turned his head slightly to look closely at his cousin, he seemed perfectly calm. How many times had Dave been over this sofa, he wondered.

He felt Uncle Dominic take hold of his t-shirt and move it up his back. A slight breeze from an open window flowed over his naked flesh. He felt his uncle move and realised he was doing the same with Dave’s shirt. He closed his eyes. Unlike Dave he had never been spanked before. Not once; not even as a very small kid. He felt his buttocks tense as Uncle Dominic touched his belt across the middle of his left cheek. He was getting his aim.

Dominic paused, he wasn’t quite ready. “Bottoms a little higher please, jut them out more.” He knew having a lad kneel like this was by far the best posture for punishment. It curved the buttocks and exposed more flesh for the belt so it could make contact with large areas. It was most effective when he stood near the boy’s head and brought the strap down from over his shoulder. This way he achieved considerable movement so the strikes of the leather were fearsome and the long belt connected with the bum and thighs with every stroke.

It was embarrassing enough to be aged eighteen and spanked for the first time but getting it alongside your cousin was too much. Dick thought he would die after he let out an almighty squeal as the strap connected with his lower bottom and thigh. By contrast, Dave took each lash without fuss. In no time both lads’ bottoms were a mass of welts: Dominic was some expert with the belt. “Keep that bottom still,” he chided Dick whose buttocks bounced up and down and his waist slew from side to side. Dave stared down at the carpet concentrating on a small dark stain and thinking maybe after all they hadn’t cleaned up so well after the party.

Dominic leathered each boy in turn: one for Dick, one for Dave and then back to Dick. And so it went on, leather rising and pounding into buttocks, again and again and again. Dick could not see this but beneath the cotton boxers his bum first turned deep pink and then various shades of yellow and orange until it was deep crimson. He sucked in great gulps of air and shut his teeth as the pain intensified. It was a warm afternoon and soon Dominic’s face was drenched in sweat but he was strong as an ox, he felt he could go on all day. Dominic believed in punishment, deep in his soul he was a man of God.

A dull pain had long since transformed into an almighty throb only to become an agonisingly searing pain across the whole of Dick’s bottom area. He had no power to resist and knelt face-down staring at the floor. Tears washed the backs of his eyes and soon they trickled down his cheeks.

Dave held back his tears but his bum felt like he had been forced to sit in a bath of scolding water. His temples throbbed and his heart was pounding.

Dominic was not a cruel man but he believed in retribution and punishment. He would make the two eighteen year olds suffer for disobeying him. He whipped another two dozen lashes across the four buttock cheeks presented submissively to him. That was enough. Dominic was certain he had made his point.

The two lads crawled off the sofa and stood unsteadily. “Get dressed,” Dominic ordered and watched Dick and Dave struggle into their jeans. Pain was etched on their faces. He congratulated himself on a job well done. “Go to your rooms.” Dominic watched Dick and Dave hobble out the door all three of them unaware of a shadow stretching across the window blinds as the man from across the street pocketed his camera phone and tiptoed down the path towards the gate.

This is for your own good

Uncle David has a plan

4 thoughts on “The party’s over”