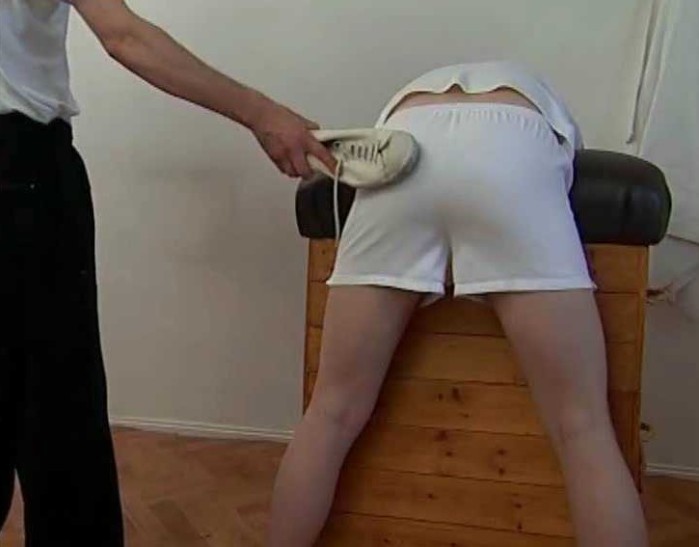 Yes, you’re right, I am bent over a horse in the gym about to get the slipper across my arse. I know what you’re thinking, “Isn’t he a bit old for a spanking?” Well, that’s schools for you I suppose. I am eighteen and in my final year, but rules are rules. What can you say?

I’m not bothered. No, really, it won’t hurt much. It’s true that the gym master Mr Cartwright is a big, strong fellow. Not that long ago he was playing rugby for the county. He can pack a punch no doubt about that. But a gym plimsoll, even a size-twelve one, can’t do that much damage.

Well, maybe to a first year. A little one might be overwhelmed by the slipper, but not me. A slipper is no use on a boy my size. Don’t get me wrong, I’m not asking that Cartwright puts a cane across my backside. That will hurt. And may I remind you that I’m not wearing pants under those shorts.

I do feel a bit foolish, I suppose. Made to bend over the horse and present my backside so a master can pummel it. It could be worse, those shorts could be at my ankles. Actually, no they couldn’t; not at this school anyway. I can’t see, of course, but I think I’ve given Cartwright a pretty good target. It feels like it anyway. The horse is just the right height for me. I fit over it perfectly. My stomach is rested comfortable on the leather top and with my legs spread, my bum is in just right position. You can’t see but my arms are half way down the back of the horse. It’s a bit awkward because there’s nowhere to put them. There’s no handles to grip on to so I’m clasping my hands together.

So, there you see me; head low, bottom high, waiting for the slipper. I don’t resent being spanked. No, honestly. I get that I’m eighteen and supposedly an adult and therefore “too old for this”, but really what’s the school supposed to do? There are rules, everyone understands that. If you break the rules you need to be punished. I get that; otherwise why would people stick to the rules? There are other punishments, I suppose. If I didn’t get the slipper, I reckon they could put me in detention, or make me write an essay or (God forbid) lines.

No, give me the slipper any time. It’s over in seconds and we can all get on with our lives. That is if only Mr Cartwright would get on with it. It won’t hurt much. Really. I’m being honest with you. It’s not some false bravado. If you’ve ever had the slipper you’d agree with me, I’m sure.

“What did I do?” did you ask? “Why am I getting a spanking?” you want to know. Of course, in a school like this you could get corporal punishment for any number of reasons; there are that many rules. Masters here use two main methods: the cane and the slipper. That said, we have a Mr McDonald, a Scotch fellow, who uses a two-tailed leather taws. No, I didn’t know either what that was until I saw one for the first time. It’s a specially made leather strap split into two at the business end. They’re all the rage in schools in Scotland. You get it across the palms of the hand, mostly, but Old McDonald sometimes gives it to you across the bum. It hurts a lot more than the slipper, that’s for sure.

Anyway, I digress. Masters have their own preferences in their weapons of choice. With games masters, physical ed. teachers and the like it’s the plimsoll. It’s a tradition. Now I think about it I suppose its because the slipper is the most easily available implement. There are no shortages of plimsolls in a gym class.

So, it’s to be the slipper for me. What did I do to deserve it? Sorry, I will tell you. It’s a bit embarrassing to be honest. I would ask you to see if you could guess, but we haven’t got all day. I’m late for dinnertime as it is. Here goes: I got caught peeping into the girls’ changing room. I know, I know. You think I’m a perve. But, why do they leave the door ajar if they don’t want us to look inside? I am eighteen you know and the lasses round here don’t exactly give it away, if you get my meaning.

So I got caught. Bang to rights. In the act if you like. Red handed. If I had been there any longer that wouldn’t have been the only part of my body that would have been red. Sorry, that’s a bit crude isn’t it.

As I said the school has rules. I was caught red-handed, and I was red-faced and now I’m going to be red-arsed. That’s the way it is. I’ve got no complaints. I can feel Mr Cartwright standing behind me. He smells a bit sweaty to be honest. I’m ready. Get on with it. It won’t hurt. Really. He’s tapping his plimsol against my bum. Here we go. It won’t hurt. Six whacks with the slipper. Over my shorts. It won’t hurt. Honestly.

He’s lifting the slipper away from my bum.

When Santa Claus was caned