Skip to content
HomeThe Morning After the Night Before 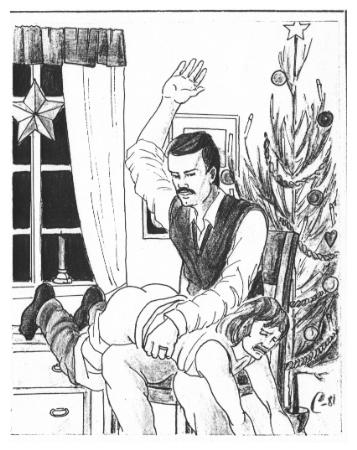 Steve stood shivering in his vest and underpants. It was the cold. And the anger. Mostly it was his anger. “I cannot believe the way he behaved,” he fumed. “I’ll never hear the end of this.”

He pulled on his trousers and a shirt and shuffled into the bathroom. The shower was warm. It dealt with his cold. But not his anger.

Soon, he was in the kitchen opening and banging shut cupboard doors. He slammed a bowl onto the table and sent an avalanche of cornflakes into it. A handful missed and sprayed onto the floor. He left them there. The brat Tony could deal with them later.

Steve opened the fridge, picked up a carton and sniffed it. He drenched the cereal with milk and bounded into the living room. He switched on the gas fire. The chill soon disappeared. But not his fury. He sat back in an armchair and gulped his breakfast. Needles were falling off the Christmas tree. Why did they have to get a real tree, he wondered. They were more trouble than they were worth. He’d be picking needles out of his feet for days.

Christmas was nearly over for another year. Thank the Lord. Why did they bother? He had spent the day with his parents and family. He and Tony. That’s what you were supposed to do at Christmas. It was a time for families. Everybody knew that. It was in all the TV commercials. Happy, smiling faces.

Drunkenness. Rows, recriminations. Words said that could never be unsaid. There had very nearly been a fist-fight. Tony was in the middle of it all.

Steve returned to the kitchen. Ran his bowl under the tap. Switched on the kettle. Sat. Waited. Upstairs floorboards creaked. Tony was up. Steve’s heart raced. There would have to be a confrontation. It couldn’t be avoided. Tony couldn’t be allowed to get away with it.

Kettle boiled. Coffee made. Steve was back in the front room. He switched on the television and ran through three hundred and ten channels. Then he switched it off. Nothing worth watching. Went to the window. Cold grey skies. December. Why did it never snow at Christmas? Wasn’t it supposed to be a tradition?

The door opened. Tony stood on the threshold. Not sure whether to enter the room. Steve’s glare sent him scuttling to the kitchen.

“Don’t you run away from me!” Steve yelled after him.

“What do you want?” Tony stood sheepishly. Hopping from foot to foot. Hands to his front. Fingers entwined. A very naughty boy.

Tony stared at the carpet. Silent.

“I have never been so embarrassed in my life.”

Tony cut him off. “You need to remember you’re my kid brother.”

“That’s it. That’s it.” Steve rose from his chair and advanced on Tony. His brother dodged into the kitchen. “Get back here. I’m going to do what Dad should have done yesterday.”

“Put that down. Get over here.” Steve pulled a hard-seated dining room chair into the middle of the room.

“Piss off. You’ve got to be kidding me.”

Tony gulped on his coffee. He gasped. Too hot.

“Have you taken leave of your senses. No way.”

Steve sat down. Spread his legs wide. “I won’t tell you again.”

“No you’re not. You enjoy it. You go out of your way to wind them up. You spoiled everyone’s Christmas Day.”

“Come off it. They didn’t need me. Aunt Edna could do that on her own. And, Mum’s not much better.”

“No I didn’t. Edna did. Going on about me having no job. And you having to put me up to keep me off the streets.” Tony bristled. He was having a hard time of it. He didn’t need his family to rub it in.

Steve seized his chance. “If you don’t want to go back on the streets, you’d better do what I say.”

A flash of anger. Controlled just in time. “C’mon Steve.” Pleading in his voice. This was just too embarrassing.

“Let’s have those trousers down. Pants too.”

“C …” Tony cut his own sentence. What could he say? What could he do? His own kid brother had him by the short and curlies. Would he really throw him out the house? He just might. Tony couldn’t take the chance.

“Quickly. Or do you want me to do it for you.” Steve rose from the chair.

“Shall we go upstairs and pack your bag?” Steve was reasonableness itself. As if his elder brother had any choice.

“No, I didn’t think so. Come here.” He reached for Tony’s left arm and dragged him along. He sat on the chair and tugged his brother by the waist. No resistance. The belt unbuckled easily. The front of the trousers opened. They slid to his knees. Baggy, ill-fitting Boxer shorts followed.

“Get over my knee,” Steve growled and he guided his brother face-down.

“Just like Dad used to do it.” Steve’s palm smacked into Tony’s ample arse. Up and down; up and down. He was surprised how quickly the image of his hand was imprinted time and again in the pink wobbly flesh.

Tony gasped. Surprised how much it hurt. Steve smacked on. Hard. Rapid. Continuous. Soon, every square inch of his big round bum was a dark pink. Satisfied with his work so far, he started on the back of the thighs.

“Ooohh.” That hurt. Tony wriggled. Kicked his legs about.

“No you don’t.” Steve lay his arm across his brother’s back. He was going nowhere.

It seemed like an hour to Tony, but it was probably only a couple of minutes.

“Are you learning your lesson?”

“Do I need to go fetch the bath-brush!”

Another minute or so. Another hundred rapid spanks. Steve’s palm was raw. But, he knew darn well, not as sore as his brother’s buttocks. The flesh shook as each successive slap sank home.

Tony struggled to his feet. Couldn’t look his brother in the eye. Bent and retrieved his Boxers. Then, his trousers. His bum was hot. Throbbing. Had his Dad’s spankings ever hurt so much?

Steve rose. Put the chair back where it belonged.

“Why don’t you piss off back to your room. Keep out of my sight for the rest of the day.”

Tony took the stairs two at a time. Crashed through the door. Whipped his trousers and pants down. Poked his bum at the mirror. What a sight. Could a hand really do so much damage?

Fell face down on the bed. Rubbed his sore bum. Tears welled in his eyes. Forty years old and spanked by his kid brother. Who would ever believe it?

One thought on “The Morning After the Night Before”