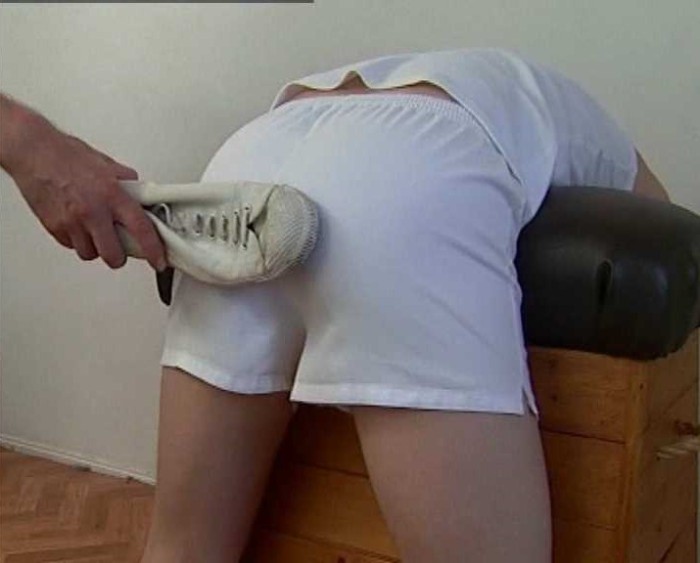 The young men at the Club – average age 19 – won both the town and the county championships this year. The first time in history this has happened.

Coach Tyler, who was appointed to the club only 14 months ago, told the Brocklehurst Bugle in an interview, “Discipline is the secret of our success.”

He said participants in any sporting endeavour needed to be committed and focused. “Sometimes young men need incentives to achieve their own and the club’s goals,” he added.

The “incentive” at Brocklehurst Athletic Club is a size-10 plimsoll with a heavy but springy soul. “They don’t make these slippers anymore, today’s have light plastic soles. I have had my plimsoll for many years. It has proven to get results.”

Coach Tyler said the young men in his club are spanked with the slipper for infraction of the club’s training policy. They also get “a warm seat” if they perform below their best on the track or field.

“All the boys agree to the rules,” Coach Tyler said, “If they don’t they are not allowed on the team.”

Ritchie Alwood, a middle-distance runner who won gold medals at both the town and county championships, told the Brocklehurst Bugle, “We think it’s great. Coach Tyler makes us bend over a vaulting horse in the gym and everyone watches while he spanks our bottoms with his slipper.”

He said for first offences they get slippered on their thin cotton PE shorts. “If you come back for a second dose you get it shorts-down on the underpants. Third time and it’s on the bare,” he added.

“It’s a real incentive for us to work hard,” Ritchie said. “The slipper hurts like hell; Coach really lays it on. You don’t want to come back for more.”

A whopping for Warminster