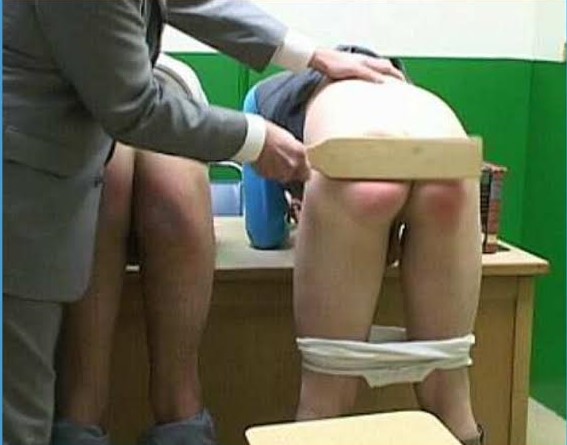 “Each of you take down your jeans and your underwear and bend yourselves across my desk.” Rev. Paisley tapped the wooden paddle into the palm of his hand and watched intently as Jackson and Manning fumbled with belt buckles. Avoiding each other’s’ eyes, the two students slipped the jeans to their thighs. Gravity took the heavy denim to the floor. Jackson pushed his white briefs to his knees, leant forward and rested his elbows on the small wooden desk. He closed his eyes, trying to pretend this was not happening. In seconds he felt his classmate Manning take up his position by his side. Two twenty-one-year-olds, buttocks bared. Ready, waiting for the sting of the paddle.

Rev. Paisley loved the end of term at Todd Carter Bible College, it gave him the opportunity to perform God’s will and guide more young men on the path to righteousness. The College had a simple rule. It was an incentive, the school principal declared. It made the young men study harder. After all, he had said, who would want their butt toasted? So, in every class, after the exams were finished the two students with the lowest test score showed Rev. Paisley their bared buttocks.

They didn’t have to fail the test – just come last. So it was that in theory (at least) they might all be A-students, but arithmetically someone had to be at the end of the line.

Rev. Paisley swiped the paddle through the air. He was nearly ready. They had said prayers together. Sought God’s guidance. Ten swats each. It was God’s will. Rev. Paisley gripped the handle tightly. As paddles went it was no monster. It was maybe twelve inches long and three wide. In the right hands it would pack a punch. And, Rev. Paisley was an expert. It came with practice. Jackson and Manning owned the third pair of buttocks he had beaten that afternoon.

Jackson and Manning were typical students at Todd Carter’s; neither tall nor short. Not fat, not thin. You might say they were standard. Typical. Average. Normal, even. Rev. Paisley felt Jackson’s body tense as he rubbed the wood across the centre of the young man’s buttocks. The flesh wobbled when he pressed the paddle in. He raised it shoulder high and with a rush crashed it home. He was rewarded by a bright pink mark on the buttock and a slow hiss as Jackson emptied his lungs.

Satisfied with his work so far, Rev. Paisley reached across to Manning, placed his hand on the student’s back to steady himself and let fly. Manning’ head shot up and shook violently from left to right. That hurt. A lot.

The tip of the good reverend’s tongue wetted his top lip.  He raised the paddle once more.

The imp next door

One thought on “Bible College”

A blog for adult boys and the Daddys Who Love us

Where adults receive consensual spankings and canings for discipline and pleasure...