It started with a knock on the front door at six in the morning. John Aldermaster had already been up for an hour, seventy-five year olds didn’t need much sleep. He shuffled towards the door. His hip was bad and giving much pain.

Another knock, more urgent this time. “Police. Open up please.”

His arthritic fingers fumbled with the security chain, but soon the door was open. Two men stood on the doorstep; one old, one much younger. The old one showed him an ID card; said he was a detective sergeant. The other one was a detective constable. John Aldermaster didn’t hear their names too well.

John Aldermaster heard that clear enough. “Yes, what’s this about?”

“We’d like to ask you a few questions, may we come in?” He crossed the threshold before John Aldermaster could answer.

They settled in the kitchen. The former schoolmaster peered at his two visitors through half-seeing eyes. The old detective was balding, running to fat. He hadn’t shaved properly that morning. His face was pock-marked and lined. His clothes were crumpled. He looked very tired.

The young detective, some kind of trainee John Aldermaster assumed, had spiky fair hair; gelled. His hazel eyes sparkled, even at such an early hour. His open face shone, courtesy of copious amounts of “product.” His ruby lips turned up at the corners; he was a young man who loved to smile. His designer trousers fitted snugly at the waist and buttocks. Cute, John Aldermaster thought; in a boy-next-door kind of way.

The old detective started the questioning. “Do you know a Malcolm Driver, from nineteen-seventy-five. He was eighteen years old at the time. In the sixth-form?”

Nineteen-seventy-five, that was more than forty years ago. Of course, John Aldermaster didn’t remember. Sometimes he couldn’t even remember if he had eaten breakfast that day.

“No, what’s he supposed to have done?”

“It’s not what he has done, sir. It’s what he says you did,” the old detective sounded disinterested. Like he was just going through the motions. Routine questioning.

John Aldermaster said nothing, so the old detective filled the silence.

“Did you use corporal punishment at St Dominic’s?”

“Both, sir,” the old detective would not allow himself to be irritated.

John Aldermaster pondered. Yes, the cane had been used liberally, until the government banned it. That’s when the country started to go downhill. Look at the young men today running wild.

John Aldermaster would not disguise his irritation, “What is the purpose of this questioning?”

“Just answer the question, sir.” The old detective hated himself for saying that. It made him sound like one of those policemen off the television. It was a line straight out of Midsommer Murders.

It was a clichéd response, but it worked.

“The school used the cane, but only the headmaster and a few senior colleagues were permitted to administer corporal punishment.”

The old detective wriggled his buttocks on the hard kitchen chair. A memory of his own schooldays was stirring.

“Alas.” The young detective made a mental note. Aloud, he said, “I’ll make some tea,” and he tested the kettle for water and lit the gas on the stove.

The old detective ignored his colleague. He still had questions to ask. “Did you ever give corporal punishment unofficially. Off the books, as it were?”

“No, not at all.” He wanted to add, “What has Malcolm Driver been saying?” but he knew that question would take them to a dark corner.

The kettle whistled. The young detective made tea and placed three mugs on the kitchen table.

“Do you live here alone, Mr Aldermaster?” the young detective asked as if he really wanted to know. Like a new neighbour in the area might ask.

“What business is it of yours?” John Aldermaster barked. He had been notorious at St Dominic’s for his short temper. The boys lived in fear of him. He did not suffer fools gladly.

The young detective made another mental note and blew into his mug of tea.

The old detective stretched his arms and yawned. Like he really couldn’t see the point of being there. This was a waste of everybody’s time. That’s what his body language said.

“Malcom says you would use a bedroom slipper on the boys,” the old detective said, almost in a monotone.

John Aldermaster stared. In former days his glare could quell a class of boisterous schoolboys at a dozen paces. Now, his eyes were dim, uncomprehending. 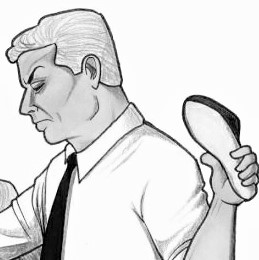 John Aldermaster’s face contorted with fury. His cheeks darkened. He struggled to contain his rage. “That seems a remarkably detailed account of something that supposedly happened more than forty years ago,” John Aldermaster dripped sarcasm.

“I should think I would remember if I was fondled and spanked on my bare bottom by a schoolmaster,” the young detective blurted. He blushed under his superior officer’s scowl.

John Aldermaster breathed deeply. Who was Malcolm Diver? Why couldn’t he remember him? What had he down to the boy in the past that he would make up these stories after so many years?

“I know what this is,” he said. “It’s that ‘historic sex abuse.’ I’ve seen it on the television. People making accusations of things that happened thirty or forty years ago. How can a person, how can I, defend myself against such allegations? It is just the word of one crazed or embittered individual.”

John Aldermaster gulped a mouthful of tea. There. That was that. The police would surely see sense now.

“We are following up a number of other allegations from boys at the school. Right the way through the nineteen-seventies, into the eighties,” the old detective sounded world-weary.

“Do you have a computer, sir?” the old detective was also seeking evidence.

“Computer? No, why should I have a computer?”

The young detective hurried into the kitchen with a huge grin on his face. The boy could really light up a room, John Aldermaster thought.

The young detective had a video case in his hand. He held it high so the old detective could see its cover. It was an all-male spanking video, The Sixth-Form at St Tucker’s.

The old detective rose from his seat. “I think we should continue this interview down at the station.”

Bug on the wall

3 thoughts on “An early morning call”