Skip to content
HomeBe careful what you wish for

“Your aunt said she’d spank you!”

“She said, ‘I should take you across my knee and smack your bottom. Hard.’”

Ro and Jack sucked on their beer bottles. Ro was staying with his Aunt Elsie and Uncle Frank while he was doing his certificate in plumbing at college. He wasn’t an unusual eighteen-year-old. He thought the world revolved around him. He wanted everything for nothing. Nobody could tell him anything. He came and went as he felt. He missed meal times; never helped about the house. He lay in bed to all hours, even on college days. A typical teenager.

Aunt Elsie put up with a lot. That’s how it was for women. They worked at a job all day and then came home to start all over again. Even the most tolerant people could snap.

“Can’t you at least tidy up the living room, while I’m out,” she scolded.

“You need taking down a peg or two, my lad!” she roared.

He hadn’t the least idea what that meant and silently sneered.

That’s when she said it. Across her knee. A spanking. On the bottom. Hard.

That night in bed, Ro played the scene in his head. They are in the living room. Aunt is seated on a straight-backed wooden chair. She is wearing her corduroy trousers tucked into thigh-length leather boots. Her roll-neck woollen jumper is tight and he can clearly see the outline of her breasts.

He is wearing blue-and-white-striped pyjamas. Where had they come from? He hadn’t worn jim-jams since he was nine years old. The last pair he had were bright yellow and had drawings of racing cars all over them.

He meekly lowers himself across Aunt Elsie’s knee. He is a short, thick-set lad. He places the palms of his hands on the carpet. Behind him his toes dig into the deep pile. His cotton-covered bottom is across her lap, his crotch presses into the rough corduroy.

No word is spoken. Aunt Elsie grips the elasticated waist of the pyjama bottoms and in a series of small tugs she tries to force them down. She can’t get them clear of his buttocks, so he lifts his body off her lap and she takes them down as far as his knees.

He resumes his position, his cock growing. The first smack gets him in the centre of the left buttock. It tingles. So does the one that strikes him on the right cheek. Smack, smack, smack.

Ro has never been spanked before. He doesn’t know what it is supposed to feel like. His bum is warming up; so is his dick. He lifts his body and lets it fall again. In time to the rhythm of the spanking. His cock throbs much more than his bum.

How could he push Aunt Elsie over the edge?

He lazed around the house. No response.

He stayed in bed all day, missing college. Nothing.

He came home late: drunk. Zilch. Perhaps his aunt hadn’t meant it after all.

Then, one day he cracked it. He was rude to the vicar when he made his regular weekly visit. Ro didn’t believe in God and why should he listen to the old fake. He told him that to his face. Ro stormed upstairs in a huff.

He fumed in his bedroom. “Bloody vicars. They’re all nonces,” he told himself. He read the newspapers. He knew what was going on.

He heard the front door open and close. Moments later, a voice called. “Rowland!” It was Aunt Elise from the bottom of the stairs. “Come down here. I want a word.”

Ro’s heart pounded. A word? Word? That was a code, wasn’t it? It had to be. “I want a word,” meant, “I’m going to take you across my knee and smack your bottom. Hard.”

He had planned for this moment. He pulled open the second drawer of the dresser and pulled out the still-unworn pyjamas. With shaking hands, he lowered his trousers and pants and stepped out of them. He tugged his pullover and shirt over his head. He stood before the mirror, naked. He sat on the bed and pulled the pyjama bottoms on. He stood. They fitted perfectly. So did the jacket.

He glanced in the mirror, admiring his firm but stocky body. Suddenly, his cock poked out the fly of the pyjamas. It always did have a mind of its own. Damn! He couldn’t go down to Aunt Elsie in this state. It would be too humiliating. And, it would give the game away.

He grabbed a handful of tissues from the bedside table, gobbed spit into his palm and polished one off. Moments later, breathing heavily, he padded down the stairs to the front room and the over-the-knee spanking from Aunt Elsie he craved.

He paused outside the closed door, took three deep breaths, and pushed it open. Uncle Frank sat in the armchair. Alone.

“I … I … Aunt Elsie?” Ro gazed around the room, as if expecting to find his aunt hiding under the table. Then he saw it. Left in clear view on the polished sideboard. Uncle Frank lifted himself out of the chair, leant forward and picked it up. A worn brown taws. An eighteen-inch length of hard leather, cut into two tails.

“B …” Ro started with alarm. This could not be happening.

Uncle Frank scrutinised the strap in his hand as if he had never seen it before. “This is not a job for a woman,” he said, tapping the taws into the palm of his hand.

Uncle Frank swished the taws through the air. He pointed it at the settee. “Bend over,” he growled. Then, in case he hadn’t been properly understood, he added, “Over the arm.”

Ro stood frozen. This wasn’t how it was meant to be. His sexy aunt was supposed to be pulling down his pyjamas. Not this fat, sweaty, old man.

“I won’t tell you again.” Uncle Frank moved toward his nephew. If the stupid brat wouldn’t put himself across the settee he would have to do it for him.

“No, no,” Ro did not move. Uncle Frank smelt the fear on him. He wasn’t a strong man, but he gripped his nephew by the hair and pushed him forward, face down, across the huge settee. To his surprise, the eighteen-year-old lay submissively. His bottom was high and his hands rested on the settee cushion. The boy turned his head toward his uncle, his face impassive. 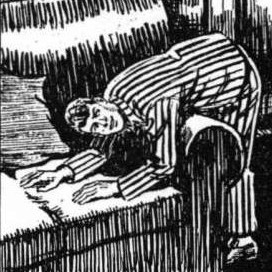 What Ro saw was his overweight uncle lift the taws high over his shoulder. He let it rest against his back. He paused. He seemed to be counting in his head. Then, satisfied that enough time had elapsed, he brought the strap crashing down across the centre of Ro’s bum. The boy heard the whistle as the strap flew and a crack as it connected with the seat of his pyjamas. It felt like an age before the searing pain registered. It was as if Uncle Frank had put a hot wire across Ro’s buttocks.

The teenager gasped in shock. Then, a second and a third swipe hit him in quick succession. Ro’s legs buckled. His hips wriggled. He beat his fists into the cushion. He wanted to yelp, but all the air had been squeezed out of his body.

He sucked in a lungful. The strap whipped him again. “Yeowwww!” he shrieked in shock and pain. Uncle Frank rested the taws against his back, counted to six and brought it down with tremendous power again and again in mighty strokes. Ro’s bottom made frantic efforts to minimise the pain and discomfort.

Ro twisted violently, bouncing his head into the cushion. His bottom blazed with fire.

Out of his eye line, Aunt Elsie stood in the doorway. Her face flushed. Her breathing as strained as Ro’s. She watched transfixed as the leather strap bit over and over again into her nephew’s deliciously stretched bum.

Later, in her bed, she regretted allowing Frank to persuade her at the last minute to allow him to beat young Ro. As she slipped her hand inside her panties she promised herself next time it would be different.

When Dad got home

4 thoughts on “Be careful what you wish for”

A blog for adult boys and the Daddys Who Love us