Mr Sedgemore pulled his threadbare overcoat tighter around his body as he battled headlong into the wind. A light drizzle was falling and soon his feet would be wet. Unsteadily, he crossed the glistening cobbled street. He would soon be home. His wife would have collected their pensions so they might have the gas fire on for an hour this afternoon.

He unlocked the door of his small terraced house and paused. Something was not right. He could hear voices coming from the kitchen. They never had visitors, except sometimes when that young vicar came to spy. On the ground near the door against the wall was a backpack. What was going on?

He hung his overcoat on a hook and still wearing his jacket, he walked into the kitchen. At the table tucking into a plate of egg and chips was a scruffy young man. The man looked up and while chewing on a mouthful of potato he nodded a greeting. Mr Sedgemore didn’t like young people. They hung around bus stops at night drinking cheap cider and writing rude things on walls. This one looked like he hadn’t had a wash in days.

“Hello Albert,” his wife busied herself fetching a cup and saucer and pouring tea. He gestured with his head and his wife followed him out of the kitchen into the front room.

“Who the hell is that?” Mr Sedgemore rolled his eyes exasperated.

“He doesn’t have anywhere to live. I said he could stay here.”

“Elsie!” Mr Sedgemore knew what this was about. She missed their sons. Both were grown up and had long since flown the coup. Richard was at the other end of the world in New Zealand. Mr Sedgemore doubted is he would ever see his son and his family again. Tony lived somewhere in London; they had not heard from him in a while. It was probably just as well, Mr Sedgemore thought. Tony was a bit limp-wristed. He never fitted in at home. He was better off out of it. God only knew what kind of life he was living. At least, Mr Sedgemore comforted himself, it was legal these days.

He knew his wife was lonely; she would see Geoffrey as a companion. Why didn’t they just get a stray dog?

“Where did you find him?”

“In the post office. He tried to steal the charity collection box.”

Mr Sedgemore’s face flushed. His mouth opened and closed like a goldfish. No words came. He was literally speechless, but the expression on his face spoke for him. “A thief! You’ve brought a thief into our house!”

Mrs Sedgemore answered her husband’s unasked question. “He isn’t really a thief. He was hungry. He needed money for food.”

“He is a thief, for crying out loud. Did you call the police?”

“No the people at the post office let him go. He looked so sad.”

“Ye Gods, Elsie, he’s really taken you in.” Suddenly, Mr Sedgemore was taken back thirty years or more to the time his son Richard had been caught stealing from the corner shop. Mr Sedgemore still had the whippy rattan cane upstairs on top of the wardrobe.

Elsie ignored her husband and returned to the kitchen leaving the old man gasping in outrage. From a distance he heard his wife’s voice. “Go upstairs and take a bath Geoffrey. Give me your dirty clothes and I’ll take them to the launderette later.”

An hour later Mr Sedgemore was still sitting in his chair, enveloped in defeat. There was no arguing with his wife. He loved her dearly even after suffering a lifetime of her whims. But this time was too much. How could they trust this thief? Wouldn’t he wait his chance and clear them out. What if he were a drug addict?

Then he had an idea. It was simplicity itself. The young man wouldn’t want to stay. Not when he learned what Mr Sedgemore had in store.

He went to the bottom of the stairs. “Geoffrey come down here please!” Immediately a bedroom door opened and the young man appeared. He had washed and shaved and changed into clean clothes. Suddenly, he didn’t seem so threatening.

“Go into the front room, Geoffrey.”

Obediently, the young man padded down the stairs and entered the room. He stood awkwardly, not sure if he was allowed to sit.

Mr Sedgemore had rehearsed the words in his head. Not looking at the young man before him he launched into his speech. “You are a thief. I do not want a thief in my house. However, Mrs Sedgemore has it in her head that you should stay. Well so be it. But you are still a thief and you shouldn’t get away with it.” The words come in a rush. Mr Sedgemore paused, looked at Geoffrey and concluded, “You should be punished. If they won’t call the police, I’ll punish you myself.”

Geoffrey watched impassively as Mr Sedgemore crossed the room to a sideboard, opened a drawer, looked in and withdrew a large wooden clothes brush. He turned and without uttering a word, he waved it at Geoffrey.

The young man blanched. He ran his hand through his hair. The silence was killing him. “You want to spank me? I’m twenty, I’m too old to spank.”

“My house, my rules. And if you are to stay here, you’ll have to get a job and pay your way. We can’t afford passengers. Not on our pensions.” Mr Sedgemore paused and gave a half smile. That should do it, he told himself. A spanking and he’d have to get a job. He was probably bone idle. Weren’t all young people? That was probably why he was on the streets in the first place. He wouldn’t want to stay now.

Geoffrey stared at the old man before him. He wanted to spank him? Perhaps he was kinky. He’d seen a few odd balls when he had been sleeping in a shop doorway on the High Street. Men who offered him money if he would lick their dicks for them.

“Go and pack your things. You should leave before Mrs Sedgemore gets back.”

Geoffrey eyed the clothes brush in the old man’s hand. It looked pretty solid, but Mr Sedgemore was old and weak. It couldn’t do him much damage. It would be a bit embarrassing, but nothing like having a throbbing cock in your mouth.

Mr Sedgemore craned his neck towards Geoffrey. “What, what did you say?”

“Let me!” Mr Sedgemore raged. “Let me! Don’t think I take any pleasure in this young man. You are a thief. You deserve to be punished.” Mr Sedgemore’s blood pressure was rising. He needed to be careful at his age. “I am doing a public service,” he trailed off, realising how pompous that sounded.

He pulled a chair into the middle of the room and sat down. “C’mon, take down your jeans, get across my knee.”

“You won’t feel a thing on those jeans. Get on with it. Mrs Sedgemore will be back soon.”

Geoffrey stared down at the old man’s bony knees. Could this really be happening to him? He closed his eyes. He had to go through with it. What choice did he have? A spanking across Mr Sedgemore’s knee, followed by a warm roof over his head or cold days and nights on the streets sucking cock for his dinner?

He opened his eyes, unfastened his belt, popped the rivet at the top of his jeans, gripped the tab of the zipper and pulled. The front of his jeans fell open and with no effort at all he had them at his knees. He took a deep breath and lowered himself into position. He was a tall boy and Mr Sedgemore short. It was hardly a perfect fit. Geoffrey reached his hands forward and pressed his palms into the garish carpet. Behind him he bent his knees and rested his stomach on Mr Sedgemore’s thigh so that his bottom was raised to receive the brush.

Mr Sedgemore wasted no time. He pulled Geoffrey’s shirt away from the target area. The brush rose and fell in rapid succession paddling every square inch of the young man’s bum. Geoffrey wriggled this way and that, but the pressure of Mr Sedgemore’s hand in the middle of his back kept him more or less in position.

Scolding as he spanked, the old man took great delight in walloping the exact same spot two or three times in succession, making Geoffrey wince and then howl. His cries increased as the heavy brush stung his upper thighs with a vengeance. His legs kicked vainly, but they were stopped by his jeans snagged around his knees.

Geoffrey wasn’t sure how many licks Mr Sedgemore gave him; it could have been a hundred, it seemed to go on forever. All of the sudden, it ended and Mr Sedgemore released his grip. Geoffrey’s hands shot to cover his behind and he performed the traditional “spanking dance” hopping from one foot to the other and then standing on tip-toes with both hands plastered to his cotton-covered cheeks as he tried to rub out some of the sting, while the old man lectured him about his behavior and promised that if there was a next time, there was a whippy school cane upstairs ready to attack his bare arse.

He pulled up his jeans and stood uncertain. What happened next? He glared at Mr Sedgemore. The old man had hurt and humiliated him and threatened to do it again whenever he wanted. For two pins he’d smash the old git’s face in. 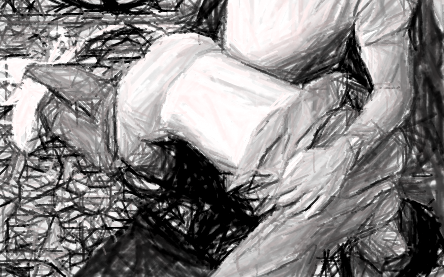